Companies that regularly open new locations probably have a lot of experience with construction.  They benefit from having established drawings to help design the next store and a familiarity with contractors, and, therefore, are a good fit for General Construction services to complete their buildings.  On the other hand, business owners who are unfamiliar with construction and don’t have relationships with professional contractors would benefit more from having a Design/Builder on their team.  This is because Design/Build perks include faster completion, a single-source to contact for all project needs, and the ability to judge which subcontractors offer the best value for their project.

Even though we can recognize that the Design/Build method would match the needs of some clients better than General Construction, there’s sometimes resistance due to the following misconceptions:

1)       Less competition will drive the price up – since there is only one entity controlling the project, there will be less competition.  We could argue that Design/Build is the ultimate method to get the best/lowest price for construction services because the Design/Builder seeks more bids and gets better bid coverage from a larger field of subcontractors than a General Contractor would.  This is partially due to the time available from a Design/Build stand point versus General Construction.  Plans and portions of plans are shared earlier in a Design/Build scenario, so there’s more time to get better bid coverage and, therefore, the Design/Builder will have all of the prices, including a culmination of the lowest ones.  Bidding on a General Construction project typically narrows the bid time and, so the GC only gets bids from a select few subcontractors and it’s unlikely one GC will have gotten all the lowest numbers.

2)      The cost for Phase I Design is an extra expense that I don’t have to pay in General Construction – this isn’t entirely true.  When a business owner hires an architect, they pay for the plans to be created in entirety, so the General Contractor can then take them to bid and determine the price to build.  Phase I of the Design/Build method establishes preliminary drawings for a nominal fee with enough information to get a preliminary budget, so a business owner can take the information to the bank for financing.  While the budget is not exact, it’s in the ballpark.  The Phase I price is only included as a line item at the end of the project, it isn’t something that an owner will have to pay upfront—unless they don’t go through with the project.  Should that happen, then the owner is invoiced for the nominal fee to cover the expense of the architectural services and bidding operational expenses.  Typically, a Design/Builder’s architectural fees are less than an outside Architect because it’s a part of the service and not a profit center in and of itself.

3)      It’s risky to put all of your eggs in one basket – checks and balances are always good to have, especially when making a large investment such as a commercial or manufacturing building.  Design/Builders have the same checks and balances internally, plus open communication to identify challenges earlier, and a contract to deliver the building to the owner the way that they expect, in the time expected, and for the price expected.  Having a reputable, single-source provider for both design and construction saves the business owner the hassle of coordinating construction activities or getting questions answered quickly as the Design/Builder becomes the advocate for the business owner to oversee the proper construction of their building (the way it was contracted to be).

As you can see, Design/Build has many benefits to offer busy business owners or those who are inexperienced in construction.  Wolgast’s Design/Build team, including staff Architect-Rick Keith, has professionally managed projects for business owners throughout the state of Michigan.  In these projects, we’ve designed beautiful buildings, accurately provided a budgetary number, created the documentation to take to the bank, gotten comprehensive bid coverage from qualified subcontractors, constructed the building, completed the punch list, concluded project close outs, maintained a one-year warranty and checked in at the 1st birthday of the building for many of the happiest clients you could imagine.  After all, it’s our reputation that’s at stake and we don’t ever take that lightly.

Find out more about the advantages of Design/Build over Design/Bid/Build in our White Paper: Why Some Business Owners Don't Do Design/Build, but Should.  Click on the image below to download. 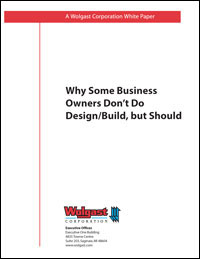 Also read:  Top Benefits of Single Source Responsibility Construction, and How Much Will a Phase I Save Me in Architectural Costs?